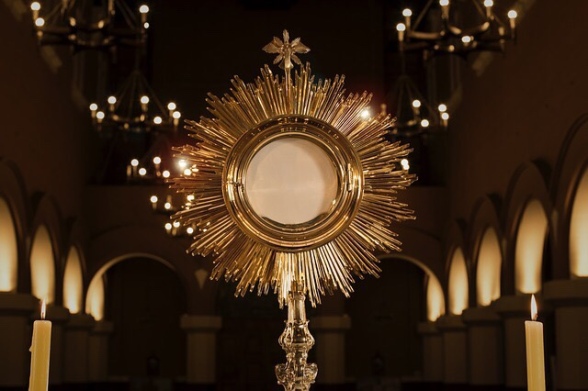 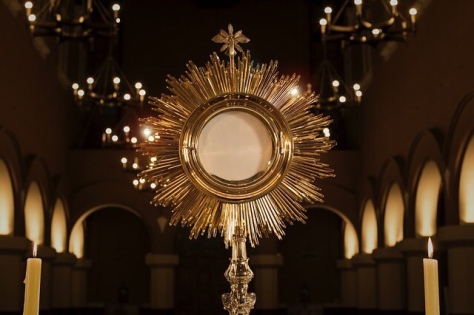 No one has known more suffering than Christ. I know that now. I know it.

He suffered on the cross & he suffers now. Every time we wound one another, be it something as heinous as murder or simple as indifference, he aches with sorrow.

Now that 87% of you think I’m crazy, let me explain what adoration is. Actually, let Brother Jim explain it. This is a lovely piece of writing Father had me email to everyone in the church (yes, someone has entrusted me with yet another database).

Father then announced at Mass this Sunday that during Advent, we’d have adoration on Tuesday evenings. I spent a blessed hour alone in the church, Christ all to myself, kneeling in the front pew.

It occurred to me after maybe 2 minutes of gazing at the Host that I would need tissues, which we apparently don’t have in the sanctuary. I wandered into the sacristy & snagged a couple. I came back, began to pray for Christ to speak to me, & was besieged with inconsolable sorrow.

Every hideous news story I’d read that day hit me with a furious sadness I was incapable of feeling while scrolling my FB feed. A 9-year-old girl who hung herself, a pregnant teenager stabbed to death by her boyfriend. Starving children. The homeless who visit our very parish hall 3 times a week. The unbearable fear & isolation & loneliness of these souls pierces Christ as surely as any spear.

There were visions of friends who are dead, one who killed herself & another who ODed. A friend’s niece who died stupidly, horribly, unnecessarily. My friend’s beautiful brother who recently passed. All walking strong & joyfully with Jesus now, but his own sorrow for them was so much.

I thought of a friend who is going through a tremendously painful, scary medical mystery, his lack of faith, & even pure hatred of God.

I spoke to him. “Is this you all the time? How do we end your suffering? What can I do to end all the suffering? You control the universe! How do we console you?”

I had the sense that all human rage & hatred is only suffering & pain, expressed in sin.

I didn’t get any answers today. All I knew is that after a little while, I stopped crying, & I looked at my watch. I had been there an hour. I figured Father probably wanted to lock up the church & go home. I got to blow out the candles surrounding the monstrance. That felt like a reward.

Sometime during this hour, I also thought of Mary, giving birth to this glorious child who was destined to suffer & die for us. That also made me sob. That never doesn’t make me sob.

On the way home, Garmana’s version of “Virga ac diadema” shuffled up. It was written by Hildegard von Bingen. These are the words in English:

who like a shield stand in your cloister strong.

You burst forth blooming but with buds quite different

Hail, o hail! For from your womb came forth another life,

that had been stripped by Adam from his sons.

O bloom, you did not spring from dew

nor from the drops of rain,

nor has the windy air flown over you; but radiance divine

has brought you forth upon that noblest bough.

within the first day of his own creation.

And by his Word he made of you a golden matrix,

O Virgin, worthy of our praise.

O, how great in power is that side of man,

from which God brought the form of woman forth,

of all his ornament, and an embrace

of all his own creation.

all earth, O Mary, worthy of our praise,

for God has loved you more than all.

O cry and weep! How deep the woe!

What sorrow seeped with guilt

in womanhood because the serpent hissed his wicked plan!

That woman, whom God made to be the mother of the world,

had pricked her womb

with wounds of ignorance—the full inheritance of grief

she offered to her offspring.

But from your womb, O dawn, has come the sun anew;

the guilt of Eve he’s washed away

and through you offered humankind a blessing

even greater than the harm that Eve bestowed.

O Lady Savior, who has offered to the human race

a new and brighter light: together join the members of your Son

into the heavens’ harmony.

Like, seriously. That happened. Of course, I burst into tears again.

I don’t really know what to do with this information except to try super hard to never cause anyone sorrow, ever. I mean I already have a No Sorrow policy, & I try to make as many people happy as I can, & alleviate pain as often as possible. But it must not be enough.

I don’t know what to do.