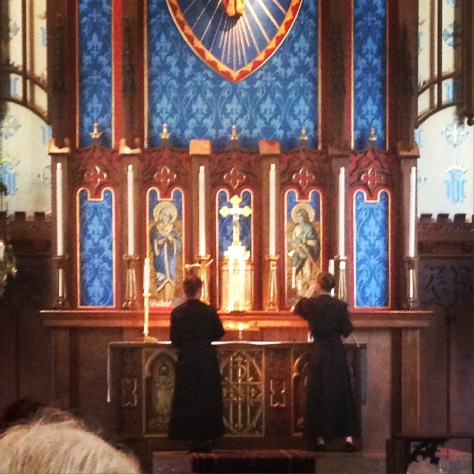 Brit & Rhiannon. They are magnificent.

Today I had to give a speech at both masses on behalf of stewardship. I was asked to post it online, so here is pretty much what I said, filling in my notes, plus pictures so you can see what I mean.

“Here’s why I believe God always wanted me to to come to St Thomas, despite being born in London & being generally the exact opposite of a “church person” for so long.

Human hindsight is 20/20, so we have to understand God’s sight, His benevolent & sometimes cheeky omniscience, in retrospect. I will tell the tale of my long, strange trip to St Thomas as quickly as possible.

I was baptized in Colwyn Bay, Wales, at St Paul’s Church, in 1976. A little later on, a lovably mischievous Welshman went to seminary with St Paul’s current rector, Christine Owen, whom I’m to understand could tell us a number of entertaining stories about our beloved rector. A condition of my confirmation here in 2014 was to never ask after any of these tales….

I had no knowledge of this connection when I discovered St. Thomas online back in 2012. I had been to a Lenten service at Saint Monica’s with my Catholic friend & was left…wanting. He asked me what was wrong. I cited the praise band & general cheeriness. He, being a comedian, apologized that his parish was not morose enough for me. I corrected him, saying, “Not morose…solemn.” I was raised in Britain, & churches needed to be made of stone, & filled with slightly awkward people who didn’t want to appear too exuberant.

After decades of spiritual experimentation, including a few adolescent years of angry atheism, & 17 years of Wicca, Taoism, & Buddhism, I was going to return to a smallish gothic stone structure that would not immediately burst into flame upon my crossing the threshold, by God!

My friend said, “Good luck with that.”

Then I turned to Google. None of the Catholic Churches seemed terribly serious to me, though to my mind they ought to have been, so I googled “English church”, figuring LA had everything. And St. Thomas came up! And there on the front page was a smiling British looking fellow who said that all are named & all are welcome. Maybe even me! 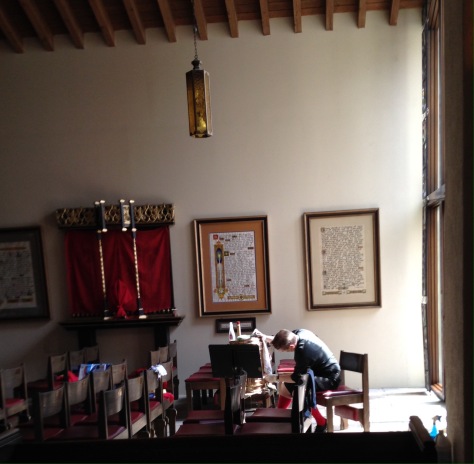 I stalked St. Thomas online for nearly a year. I listened to all the music. I kept coming back to the music almost obsessively. I planned to drag my sister & mother to a Schola Mass, but there was a funeral that day, so we went to an English pub instead.

I used to be on Twitter a lot. I have several friends who are actors, & began following a friend of a friend. This gentleman posted a picture of a very familiar altar. I tweeted him immediately: “@robertpatrickt2 OMG, do you go to St Thomas?” He responded immediately “You bet I do. Hashtag Episcopalian, hashtag Anglocatholic.” I tweeted back excitedly “OMG! What’s it like? Is is sufficiently solemn?” He tweeted back “It’s high Anglican, baby! Get your butt down here!” I checked online, then texted my sister, Caroline, “OMG. St Thomas is having an Easter vigil tomorrow. We have to go! Robert Patrick said!” She texted back “What even is your life?” And also “Yes!”

That night I had nightmares that nobody would let me in the church…that grannies with submachine guns stopped me at the doors & shoved me into a white van & told me I wasn’t good enough to come back to Jesus. I came anyway.

It was magical. I was in love immediately. It had been so long since I had really been to church that I thought I had to introduce myself to everybody during the peace. I barely talked to anyone after, but couldn’t wait to come back. I arrived the next morning for Easter Sunday & cried my face off because I felt stupid for waiting so long. I felt at home, more at home than in my own home. I felt Christ’s presence from the altar & all around me & even in the woman next to me whom I haven’t seen since. I had the singular thought “This is my life now.” And it is!

My sister & I enrolled in catechism & got confirmed. I came here whenever my health permitted. Sal & I came up with the Let’s Talk About series. I’ve gone into discernment to become a spiritual director. I have made the absolute most dearest, wonderful friends here whom I would actually die without & who push me to be happier, healthier, smarter, more loving & more peaceful. No, just kidding; all we do is MOAR STUFF. There are several of us here who would move in & just hold some kind of service 24/7 if we did not also have to eat & work & go to school. 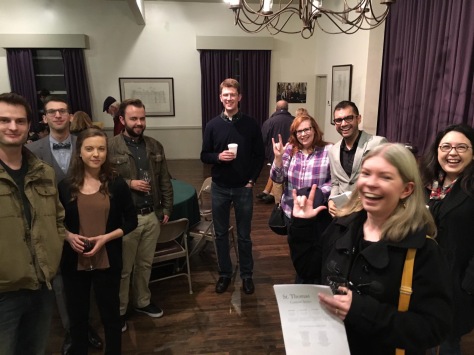 People I love, some of whom legit would move into the church, one of whom symbolically did by going to seminary.

So that brings me to stewardship. So many people here do so many loving things for this community, sometimes just for the fun of it, but the end result is this holy, super weird family.

Me & Art looking like a young Republican couple from the OC.

Volunteering as a stewardship representative & this year, God help you all, as a captain, means I get to speak to people I’ve never met, hear ideas I’ve had myself or never considered. This stewardship campaign alone has inspired inquiry into developing a regular evensong, & encouraging children & families to attend with education or children’s activities or all of the above! I keep saying I have no time and yet I want to make all of this happen!
God just laughs & laughs.

Every year that I publish a book, I increase my stewardship pledge by 50%. I admit that this is partly to bribe God into increasing my sales, but it is also because when I hope I’ll get a little more, I want to give a little more. I will get even more involved here & one day be married here & baptize a child here (God willing), & when the UNR medical school is done poking at my remains for a semester, my ashes will come here. I want to be with everyone in these walls until the San Andreas fault sends this vivacious, sneering, desperate, gorgeous town northward to Alaska. I want to laugh with God at every timid witch who wonders if Jesus really wants her back, forever & ever, amen. I want to laugh when she finds she’s up to her eyeballs in food prep for receptions & trying to find a mic for the guest speaker & praying her bad knee will let her rise again after the Angelus. I want to be housed in this place until the world ends, so I’d best sell more books so I can give more with each passing year. I love St Thomas. You are St Thomas, so I love you. Thank you.”