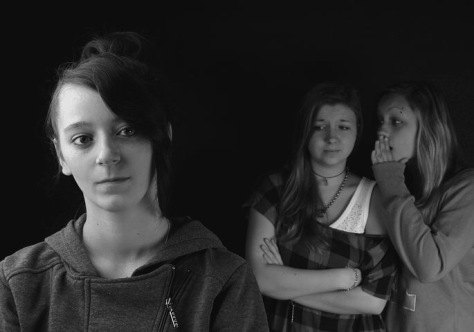 All y’all acting like you hate drama & you just want everything to be calm, but I have looked into your beady little souls & nearly every last one of you is high school AF…as the high schoolers say.

Don’t even; just stop. You know it. The second someone not in your group loses or messes up, schadenfraude washes over you like warm, buttery caramel down a monkey’s back in a movie I shouldn’t tell you about.

I once watched a group of approximately 40 adults learn something at a party about another person — something that was irrefutably awful enough on its own. But after an hour of discussion, they started finding other things to discuss to further drive home this person’s repugnant nature. “Oh, not only did he kill that girl, but you know I never liked him.”

“Oh, me either. He chewed with his mouth open. Who does that?”

And then the swarm. “OMG, one time? We were at lunch? And he didn’t contribute to the tip.” Stories like this continued for hours.

These were male and female adults between the ages of 37 & 68. And that wasn’t the only time. In fact I’m pretty sure I’m confusing two or three incidents.

Y’all do it online with your values signaling to other kids in your clique. Y’all do it when you tweet mean things at the Real Housewife you’ve never met, but hate (but honestly what the hell is wrong with Brandi Glanville?!). Y’all do it when you wreak havoc at the office trying to find out what happened to Clay in marketing.

And you know what? You never won’t. It’s been hard wired into your brain boxes for 40,000 years. You are tribal & are wired to be so. I can’t even talk about how awful you are to my own tribe, who are, generally speaking, thoughtful intellectuals & philosopher kings, natch. We like David Lynch & rescue cats & college radio even though we’re closer to 50 than 20. And we heart David Bowie (every era, damnit) & utterly despise gossip.

Except David Bowie said, I read somewhere, probably in Vogue or more likely Allure in the early ’90s, that gossip is how the middle classes get their news. It’s empowering. And I don’t fault it for that. In some organizations, it’s the only way anyone learns anything.

This isn’t even a treatise against gossip. If it’s not cruel & you admit your sources are not verified, gossip can be entertaining & helpful. Why yes, that chick is pregnant, & that is why she broke down & started crying in the middle of book club, then ate all the quiche.

The problem is the high school pettiness that is everything now. News, public discourse, and even presidential communication has been replaced with adolescent tomfoolery. Everybody is nasty, & don’t think it just started with President Obvious. Obama threw a whole ton of shade, but people think shade is classier. It’s certainly less obvious.

There are all kinds of mean girls. Some say awful things to your face. And some quietly ruin you from the shadows. They both go to high school, they both post on social media, they all run for office & they’re male & female of every flavour of sexuality the human imagination has recently dreamed up.

It’s popular to be high school. But I never liked high school. My core group of friends were literally the same type of people I like now: college radio listening, David Lynch liking weirdos. The difference now is that I like church people, too. Sometimes, they are also college radio listening, David Lynch liking weirdos. Sometimes they have nothing more in common with me than a love of Christ. And the cool thing about Christ is that He’s generally enough in common to break down tribal thinking.

I know a lot of you who read my stuff don’t care for religion of any kind, & the good news is, you don’t have to follow Christ to stop being a tribal high school asshat. Though I recommend Christ as a short cut through everything that blows. He’s like lemon juice; He brightens the flavour of everything.

But enough stupid cooking-oriented blasphemy. The key to letting go of high school tribalness is to find one thing in common with The Other. That’s it. And I can tell you what several things in common you have with The Other right now, even if you can’t bring yourself to do it.

Not one of you is a silicon life force that breathes lava and craps stone. But even with that being, you have one thing in common. Crap. Everybody poops.

The next time you want to plaster somebody behind a wall with your hatred &/or righteous online trolling, imagine  that person with Norovirus. Imagine yourself with Norovirus. You both live in the bathroom & want to die, right? Doesn’t that espouse just a little empathy?